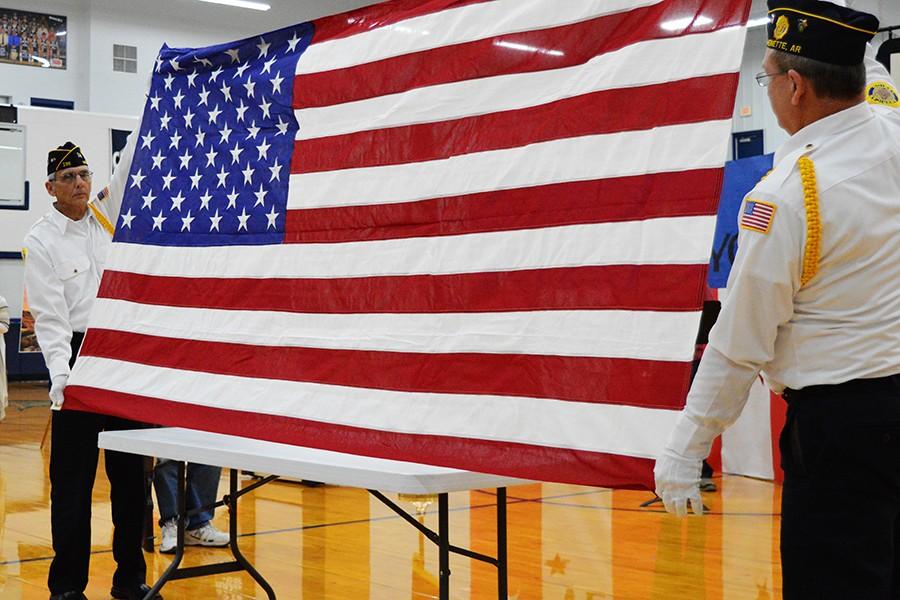 Color guard members Robert Chambers and Dickie Pace reenact the folding of the flag that would take place during a military funeral.

James Butler is a veteran who served for 33 years. He was drafted into World War II on December 5, 1941, two days before Pearl Harbor. He was put into the Army Medical Corps, working as dental technician. He spent 13 of his years of service in Panama. These were all things that students learned about Butler in his tribute video, which was put together by Olevia Hughes, Nikki Gordon, and Jessica Krob. Mr. Butler and multiple other veterans were honored during the 2015 Veterans Day Program.

With student speakers such as Drew McFall, Natalie Campbell, Alex Talavera, Olevia Hughes, Jessica Krob, Julie Thompson and Curston Davis, this program was planned by the EAST Initiative to show gratitude towards our veterans.

Butler was presented a plaque in honor of being the first veteran in the Buffalo Island Veterans Hall of Fame, a new tradition that was put in place to honor our local veterans. Arkansas Representative and veteran Dave Wallace was the guest speaker. He spoke about his combat service and the freedoms enjoyed in this country.

The program continued with Leo Perez performing “God Bless the USA,” while the whole crowd gave him a standing ovation. Afterwards, a few veterans came forward to fold the flag in honor of all of the deceased veterans, which was followed by Seth Church playing “Taps,” the song played at military funerals.

According to EAST facilitator Jill Sanders, there were approximately 50 veterans in attendance. Sanders said that the program was a great success at honoring and thanking our local veterans. A thank you video to veterans compiled by  Samantha Colby, Desiree Lancaster, and Carmyn Ballin was also shown during the event.

Sanders also acknowledged that the program was put together by multiple students working hard and devoting a lot of time that were not speaking during the program, including Tyler Morris, Jayden Fowler, Britney Cook, Joanna Perez, Amanda Sipes, Lizette Vasquez, and Betthanya Olivares.